Home >> The leaders of the late Tokugawa period were the first to perform dances with their swords.

The leaders of the late Tokugawa period were the first to perform dances with their swords. 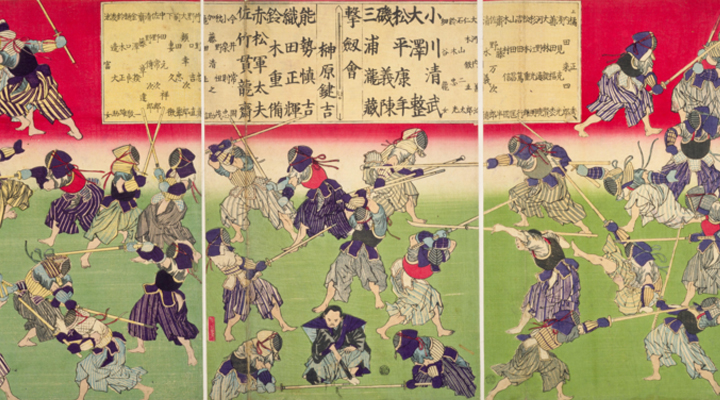 As in any other field, the question “when it all began” is difficult to answer precisely also in the case of kenbu. When the sword itself was brought to Japan from the Asian continent, the tradition of using it in dance performances may have been imported at the same time. In terms of records of “dancing with a sword,” such practices have been mentioned as early as in the “Taiheiki” (a war chronicle of the 14th century). But there is no historical connection between those practices and today’s kenbu, and it seems that there is a gap regarding the respective origins. ​ 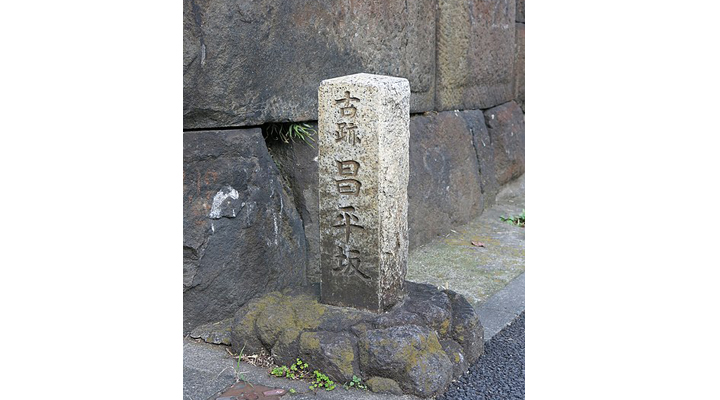 About the direct origins of kenbu, there exists a popular theory that drunken students of the Shoheizaka school were the first to draw their swords while chanting classical Chinese poems, and this may be the easiest explanation of how the tradition of sword dance started. Some kenbu practitioners, however, reject this theory, based on the martial artistic idea that the sword is a tool that isn’t all that easy to handle. Anyway, personally I consider the aforementioned episode to be rather essential when it comes to defining the origins of kenbu. 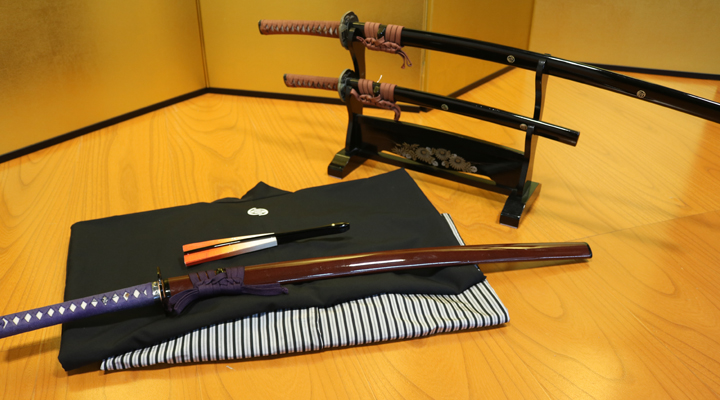 The Shoheizaka school was in fact the predecessor of today’s University of Tokyo. The idea that, against the backdrop of the surge of the Great Powers, devoted students used Chinese poetry and their swords to express their anxiety about the future of their country, sounds very reasonable as a motive for samurai to draw their swords and dance with them, and this is where I seem to detect an original kind of value that doesn’t exist in other forms of performing arts.

The beginning of show fencing as a form of performing arts 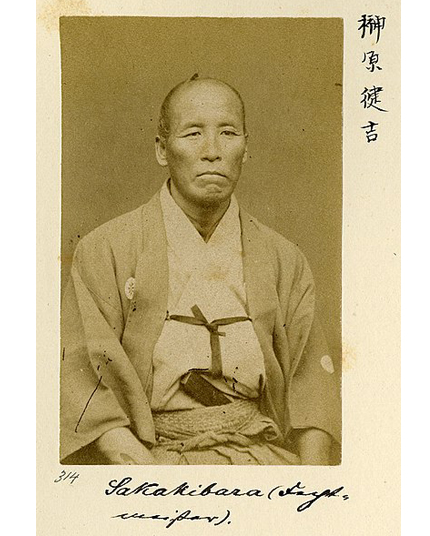 The origins of kenbu as a performing art go back to 1873, when the swordsman Sakakibara Kenkichi began to show kenjutsu (swordplay) performances, called Gekiken fencing show, as a measure against the decline of kenjutsu dojo (training halls). In the manner of sumo wrestling, kenjutsu matches used to be staged in front of the general public, with sword dance performances inserted for entertainment between the matches. This is how kenbu became widely known at one bound, and Gekiken fencing show and kenbu rapidly increased and gained popularity all across Japan. One of the kenjutsu masters at the time was Hibino Raifu, who founded the Shinto-ryu (Shinto school) in Tokyo, and thereby established the style of present-day kenbu combining poetry recitation and dance with swords and fans. Next to the Shinto-ryu, there exist a number of other schools as well that helped originate kenbu, and it is via branches of such schools that kenbu established itself as something to be practiced in okeikogoto (“individual enrichment courses”).

a simple performance combining only the ginshi's voice, a sword and a fan. 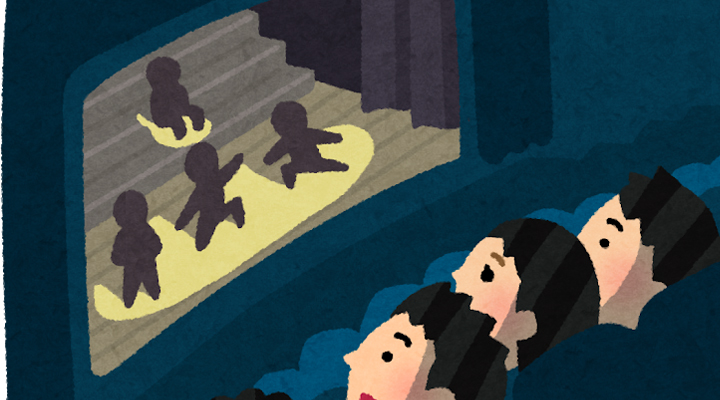 a simple performance combining only the ginshi's voice, a sword and a fan.

The most basic and classical style of ginkenshibu is a simple performance combining only the ginshi's voice, a sword and a fan. The ginshi (who chants the ginei) stands at the side of the stage, while the maishi (the dancer who performs the kenbu or shibu) appears in the center. When the maishi shouts something like ”Hah!” this is the signal for the ginshi to start singing, to which the maishi then dances with his or her sword and fan. While listening to the ginshi’s sonorous recitation and relishing the sound of the recited poem, the audience enjoys at once the maishi’s manly dance in a dramatic rendition of poetry. Stage sets and props are mostly unnecessary, and those who witness a performance for the first time will probably be overwhelmed by the intense power of the recitation and dance respectively. For the poetry recitation, comparatively short Chinese poems such as gogonzekku or shichigonzekku (quatrain with five- or sevencharacter lines) are used most frequently, but there are also waka or haiku poems. The duration of one program is about three to five minutes.​ 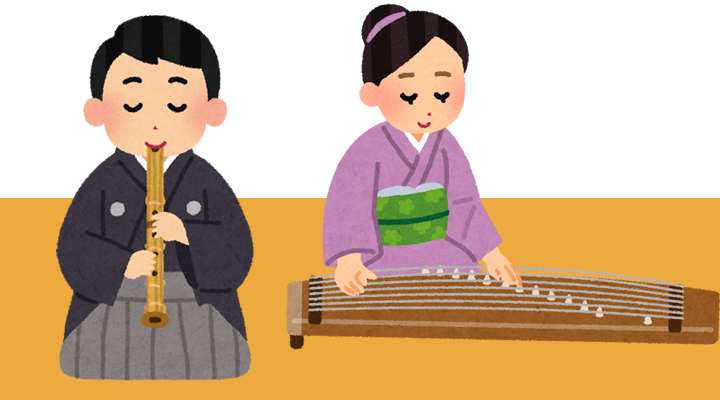 The singing is often accompanied by performances on such Japanese traditional instruments as koto (sou) or shakuhachi, and today this style has become mainstream. As the order in this case is overture song postlude, the maishi’s appearance is timed with the overture. Next to the koto or the shakuhachi, featured instruments include also the dora (gong), bells, and other items to accentuate the musical accompaniment. After the war, the development of musical playback devices resulted in countless orchestra recordings of such accompaniment music. 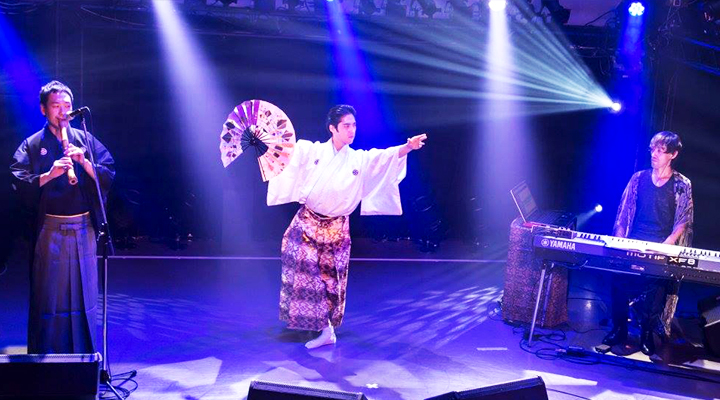 Depending on the program and the stage, performances may feature group dancing by multiple maishi, or other configurations devised to communicate the story with more clarity. Some large-scale performances and recitals incorporate special lighting or stage sets, and in recent years, synthesizers have come into use as musical instruments. Like in other forms of traditional performing arts, there are various and increasing numbers of forward-looking endeavors, including collaborations with performers from other genres.